Who’s Responsible For This Mess?

The facts of a recent bankruptcy case perfectly illustrates one aspect of the recent economic collapse – loan defaults. In the case, a 51 year old, disabled and umeployed debtor making approximately $5,000 per year from social security disability, took a $20,000 cash advance from his credit card. The cash advance represented approximately three times his yearly income from social security disability. The debtor used most of the money to pay other bills, such as his mortgage and utilities. He spent the remainder of the money on miscellaneous items, such as clothing, food, and gasoline. One week after taking the cash advance, he filed bankruptcy and sought to discharge the credit card loan.

The creditor challenged the debtor and sought to have the loan declared “nondischargeable.” The creditor argued that the debtor committed fraud because it was clear that the debtor could not possibly repay the debt. The debtor’s response was that the credit card company never should have loaned an unemployed and disabled person living on extremely fixed income $20,000.

So who’s responsible? Was it the debtor for taking out a loan that he couldn’t possibly afford to repay? He was desperate to pay his bills and the credit was readily available.

Was the lender at fault for extending $20,000 in credit to someone making less than $5,00 per year? The lender argued that the credit card was opened when the debtor had significantly higher income and that the lender had no idea of the debtor’s disability.

Both sides have compelling arguments but, in my opinion, THEY’RE BOTH RESPONSIBLE. Borrowers should take responsibility for their actions and so should lenders. Pointing the finger at each other is the easy way out and does not solve the underlying problem. Similar incidents are playing themselves out across the county, only, in many instances, the “debtor” is a large bank, the “creditor” lending the money is an even larger bank, and the loans are more than $20,000; they’re more like $20 million. Everyone’s pointing the finger at the banks, but let’s not forget about the debtors that borrowed more than they could afford.

Unfortunately, the credit lending standards of the last few years were so loose and so easy that such a scenario was possible. The economy was healthy enough that the financial institutions were able to conduct little or no due diligence before lending large sums of money. Debtors (individuals, small and large corporations, and even federal, state and local governments) slowly began to rely on this “easy credit” access, resulting in deficit spending across the board.

by Scott Schuster, Esq.
As debtors began to get in over their heads and defaults began to occur on a large scale, the economy suffered. As the economy failed, everyone suffered, including those that acted responsibly. Responsible debtors that only borrowed what they could afford to pay back were hurt by the economy when their retirement assets lost value. Similarly, responsible lenders that conducted proper due dilgence before extending credit suffered as investor confidence dropped and stock prices plummeted. Hopefully, individuals, corporations, lenders and government leaders alike will learn from these mistakes. 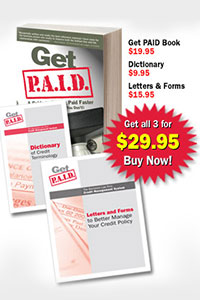 Get P.A.I.D.®: A Guide to Getting Paid Faster Bundle 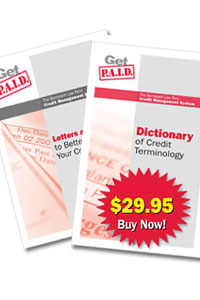 Dictionary of Credit Terminology and Letters and Forms bundle